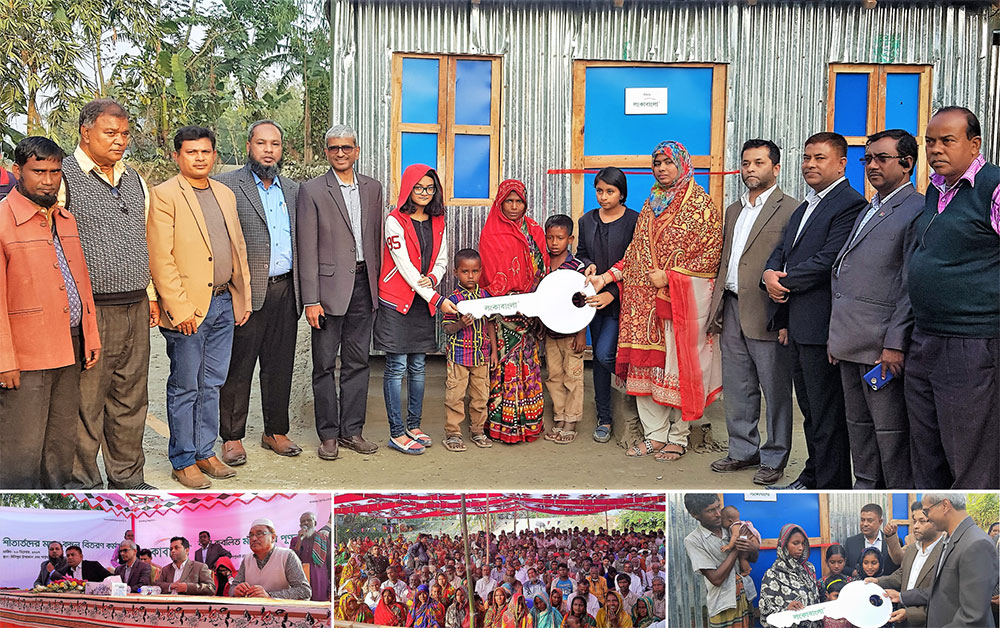 This massive LankaBangla Rehabilitation Project was planned just immediate after the flood this year (2017) when we witnessed the untold suffering of flood victims of different remote islands (char areas) while distributing relief goods in these chars at the end of July & beginning of August 2017.

The Rehabilitation Project includes a tin-shed house, a sanitary latrine, a tube well and some wood bearing trees for each family. We have completed and handed over 65 tin-shed houses, 65 sanitary latrines, erected and handed over 25 tube wells and planted more than 300 wood bearing trees (surrounding the 65 houses) among the flood victims. Under the leadership of Mayor of Ulipur Pouroshova, Ulipur, Kurigram Mr. Tariq Aul Ala and with the relentless hard work of his volunteer team during last 03 (three) months finally we have implemented the project successfully.

The volunteer team and LankaBangla visited remote islands (chars) of Kurigram district, identified & listed most affected vulnerable families, assessed their needs, arranged & transported materials for final execution of different components of the project and beat the challenges of doing this project in different distant remote islands (chars) of Kurigram district and happy to see the smile on the faces of homeless people.

Besides, we have also distributed 1,000 blankets among ultra-poor people of Ulipur Upazila of Kurigram district on the same day. Blankets are also given to the beneficiaries of the project.